Since February of 2017, Amanda has brought new and innovative programming to our monthly activity calendar. She is motivated, creative and has a calmness about her that is always well received well by our participants, their families, and our volunteers. She recently started a Hand Bell Choir at DayBreak and includes the children from a nearby preschool on a regular basis. Amanda also leads our Java Music Club and Memories in the Making Art Program. She is a treasure to have on staff.

Joni, Assistant Director and CNA, is a native of Colorado Springs and resides there with her husband of 20+ years, as well as her 21-year-old daughter who currently attends Pikes Peak Community College. She also has three brothers: two older brothers in Idaho and a younger brother in Louisiana. Joni enjoys traveling to visit her family and expresses her love for animals, the outdoors and reality TV. When asked what brought her to DayBreak, she responded, “I love helping people and making a difference in their lives.”

Deb, working in memory care and long-term care facilities for most of her career,
joined DayBreak in December 2019 and is one of the newest addition to our growing team. Originally from Minnesota, she brings a true sense of compassion, gratitude and joy to those around her. The participants truly love her positive attitude and infectious laughter. An individual of many talents, she assists our program with all of its activities, scheduled outings and events.

Heidi just joined the DayBreak team this June as Administrative Assistant. Although she is new to this position, she is no stranger to DayBreak. Heidi has spent the last 3 years cleaning DayBreak on a weekly basis and has also volunteered with various activities and field trips since we opened in 2016. Before coming to DayBreak, she spent most of her career as a Health and Physical Education teacher in the Pueblo and Woodland Park school districts.

One part parent/advocate/guardian. One part Grandmother. One part Colorado State University MBA graduate. One part Colorado Springs native. One part animal lover. One part cook, baker, photographer. One part bluegrass music lover. We are thrilled that Joni introduced Theresa to DayBreak back in February and that she wanted to quickly be a part of our team – helping us find any and all kinds of donors & donations. She will be our #2 IndyGive! Representative – attending all trainings and events with Paula.

A native of Colorado Springs, Charlie is a graduate of the University of Denver and has a distinguished 40 Year career as a banker in Denver and Woodland Park. He has participated in the formation of “Voices of Grief” that also provides a compassionate and valuable service to our community.  Charlie also was The Chamber of Commerce “Wagon Boss” (2009) recognizing his service to the community.  In his banking career he enjoyed the unique opportunity and privilege of participating in the growth and development of the many individuals and businesses that this bank was privileged to serve.

Most importantly, as a longtime (20 Years) family caregiver of his wife Helgi, Charlie found DayBreak so instrumental in providing them both the respite care they needed up until his wife’s passing in August of 2016.  He remains a great supporter of DayBreak and the services it provides the Teller County communities.  Charlie states that he “is honored to serve on the board of directors so as to be a “testimonial ” for the DayBreak program and the services it provides for both the caregiver and their loved ones.”  The mission and support of DayBreak provides a positive  impact on the caregiver and the care-receiver.  For these reasons alone he chose to be on the Board of Directors  to help make more public the fact that this valuable program is available in our community and how beneficial it is for all who participate.

Commissioner Dan Williams is a retired US Army Colonel, Apache Pilot and decorated 30 year Combat Veteran with tours in Iraq, Afghanistan, Kuwait and Albania.   His parents lived for many years in Teller County near Florissant.  He returned to Teller County after serving his Country and lives with his wife Suzan, a retired US Army Nurse on their ranch near Cripple Creek.
Dan is a recognized Community and Veteran leader in Teller County.  Dan has served Teller County as a consultant, the Teller County Planning Official and now as the District 1 County Commissioner. Prior to assuming office Dan assisted the previous Board of County Commissioners in writing both the Teller County Strategic Plan and the 2020 Teller County Growth Management Plan.  He is a West Point graduate with two Masters Degrees to include one from Kings College in London England.  He is a 2017 graduate of the Leadership Program of the Rockies.  Dan serves on numerous boards and organizations including,  the 5th US Congressional District Service Academy Nomination Board, the Pikes Peak Round Table, the Southern Shooting Partnership Board, the Teller County Wildland Fire Counsel, and CASA.  Dan is a member of VFW Post 6051 and commands  American Legion Post 1980.  Dan and his wife Suzan have two children and 2 grandchildren.

Samantha has lived in Woodland Park since 2006 and really enjoys contributing to the small town she loves so much.  She is the managing partner of Kelley & Chulick CPAs which gives her the opportunity to help many residents of Teller County and beyond understand and take control of their financial lives.  Her non-profit work includes serving on the board of the Woodland Park Chamber of Commerce, volunteering with Faithful Hearts Equine Learning center as well as serving on the board, volunteering with Cub Scouts Pack 20, and serving as their treasurer and volunteering at her daughter’s school, Merit Academy, as often as possible.  She has two young vibrant kids and an amazing husband who helps her keep all the balls in the air.  Samantha has a real passion for helping non-profits succeed financially and keep on top of tax compliance.

A longtime resident of Woodland Park, Bernie has seen many changes in Teller County over the last fifty years.   After helping to care for her mother-in-law who had Alzheimer’s and watching a very close friend care for her mother-in-law with Alzheimer’s, Bernie is very passionate about DayBreak and its vision.  Being a care giver can be a very lonely and exhausting time in a person’s life and she can only imagine the person with the disease is equally lonely and sometimes disillusioned.

DayBreak’s program is a wonderful opportunity for families and it is a long over-due service that Teller County now provides.   She excited to learn more and contribute in any way that would be an asset to this organization.  She is thankful for the opportunity to serve on this board!

Mike grew up in central Illinois and is retired from a great 35-year international career with Caterpillar, Inc. that moved his family around the world. He then worked 5 years as a business partner with Accenture, doing international business consulting. In 2013, Mike and his wife moved to Divide, Colorado was their 11th move together. Then in 202, they moved to Woodland Park. They have two married sons and three grandchildren. His non-profit experience includes being a volunteer pilot for LifeLine Pilots, Angel Flight Central and Angel Flight West. He has served on the board of LifeLine Pilots and as Colorado Wing Leader for Angel Flight West. In addition, Mike has served as an elder in three churches, most recently as chairman of the elder team at Woodland Park Community Church. He has a passion for servant leadership and is a certified facilitator for Lead Like Jesus. His wife, Lori, was diagnosed with Parkinson’s Disease in 2007 and he is currently her primary caregiver. He first learned about Daybreak from a friend whose wife was a Daybreak client. Based on his caregiver role and through his friend’s experience, he has real heart for the mission of Daybreak and is excited about the opportunity to join the Board of Directors.

Won’t you be a part of our expansion by donating today? Any amount will help us in our next step to expand our program to serve even more families in need of caregiving respite and loving support. 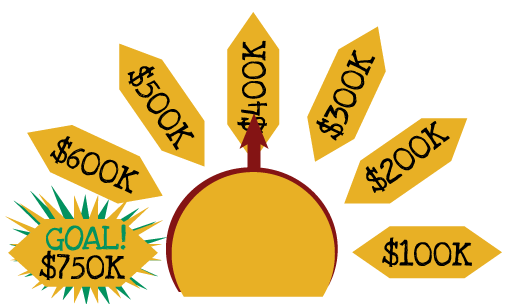 Won't You Help Us Shine?